Our previous interview was very interesting for one of the major newspaper in abroad in Slovak Republic 😉 Although this is translation of the interview even though we are pleased that the mentioning about Little Mole got to our former compatriots! We like Slovakia, we like the Slovaks and they like Little Mole. That’s the way it’s supposed to be. You can read the article here “Czech Little Mole went to see the world. He was seen in Mexico, New Zealand or Rio“.

6th November 2016 – Interesting interview about our trip around the world

Our traveling has attracted one of the largest Czech newspaper to whom we gave interview. In article you will find out how we did preparation for trip, how was  traveling itself, what were our more and less beautiful experiences, how is related Mr. Mole to our trip and much more. You can read the article here “He was in space, now has Mr. Mole returned from a trip around the world.”

13th November 2015 – Getting to know Mexico and US east coast

Getting to know North America and meeting amazing people. Follow up article from Karlovarsky Denik really pleased us. It describes our wandering around Mexico, time we spent with people but also our explorations of archeological sites and pyramid complexes. Either it does not miss out our travelling in the US coast where we received help from many Czech people with whom we felt like back home but as well as Americans who gave us great shelters and provided us with tips for further trips. More about it you may find in the article “Travelers are behind the American continent. Part II“.

How we travelled South America and ate guinea pig. VAnother article about us has been issued and briefly you can learn about what countries we travelled in South America, what transportation we used and what food we tasted within our trip around the world. Details can be found in the article “Travelers are behind the American continent. Part I“. To be continued.

Walking like crazy, we have walked more than 3 million steps! Karlovarský deník follows our wandering in the world and we are happy about it. This time you find out more about how Russian people are everywhere and that walking around the world is more than healthy. If you wan to know more raead about how we “Walked three million steps and visited Vietnamse Carlsbad“. 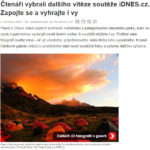 And we decided to help even more! iDnes.cz announced a photo contest about the best summer morning photography. The prize was the voucher to Aquapark nearby Prague. Well for us it was not that important because we have so many amazing experiences within our round the world trip anyway. But we said let’s do it and we have won! Prize won in a photo contest was given to a family from Carlsbad whose little girl Adelka won a fight over a really serious illness. We truly believe they are gonna have a wonderful day in the Aquapark.

On the trip around the world we decided to help! Karlovarský deník was so nice that they decided to suport us in our nice act. They wrote another article about us, mentioned our travelling, how we got to the USA but also confirmed they agree that “Every little may help people in need“.

1st April 2015 – The most magnificient adventure ever

Huray we are on TV! In Cuzco, Peru we met local reporter who used to cooperate wth one american TV channel. Word took work and we provided an interview that appeared on the screens on 1st April! 😉 The news report surprised us and it amused us and you the same day. Well maybe we are gonna be even on the Czech TV. 🙂 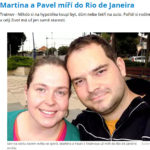 Heading towards Rio and trip around the world has begun! We were pleased because we were lucky that even Krkonošský deník was curious about us. During our final preparations, packing and saying goodbye with a family we met the editor in her office in Trutnov and for the first time in our lives we provided an interview. Till the last moment it was a surpise for us. About how “Martina & Pavel are heading to Rio” we read really when we were already on the way. 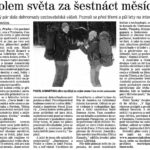