Valparaiso - city of art and colours

Valparaiso is a city distant cca 150 km to the west from Santiago de Chile. Vacation in Valparaiso is an experience for foreigners but also Chileans. The city is a pearl of Chile and it centralizes the intellectual, art and architecture of the country. Therefore Valparaiso is protected by UNESCO which is at some point and advantage but on the other hand also a disadvantage. The city gets money from the funds but they also push them to restore the houses more and locals are sometimes simply not able to pay it so they often wait for a real disaster like earthquake because then government pays them everything to preserve UNESCO status. 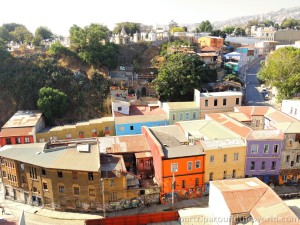 Valparaiso is also famous for its primacies within Chile. There is Chile’s first public library, Latin America‘s oldest exchange office, as well as the continent’s first volunteer fire department or the oldest Spanish newspaper in continuous publication in the World since 1827 up to now, El Merucio de Valparaiso.

The city literally revels with colors. It markedly reminds us La Boca we mentioned in our post about Buenos Aires. The legend says that people started painting their houses after one local painted his inner flat and had enough color left. He had the idea to paint his all house from the outside too. People started to be envious about it because they truly liked this eccentricity and started to do the same. It may look that colors are chosen randomly but that is not true. They express the social status. The biggest authority surprisingly still holds the white color.

Street art in every corner

Valparaiso is not such a big city but still there are 15 universities and is a place of national congress. Politicians do not like it because most of them live in Santiago and have to come here every day. There are many young people and

this leads to higher interest about street art. Some of the paintings can be truly considered as the art. Most of them are also requested in Europe. Some of the local artists moved there.

Vista point of the city is the beach. There are many long nice beaches that reminded us beaches we know from Rio de Janeiro. Valparaiso offers many ways how to spend your leisure time.

If you come to Valpo you definitely have to try some seafood – it’s delicious and really cheap here. We tried conger eel and it was so yummy. And there is one more dish to try. We went to the famous restaurant J. Cruz M. to try famous chorrillana. Forget about snobby posh place. This restaurant is located in a small sunken lane full of graffiti. Exactly the type of lanes you normally try to avoid. Nevertheless when we came inside we were surprised by original atmosphere. The whole restaurant looked like a big scenery pusher for making movies from the half of the last century. 😉 And people leave here their photos as a gift for the restaurant. So when you are eating it looks like there is a crowd around you. It is strange but nice. And we also ate delicious conger eel because it is one of the local specialities. It was yummy! 😉

Arica and border crossing to Peru

Our feelings about Chile - beatiful nature and places

Arica and border crossing to Peru - how to get there

Puerto Natales - spot to prepare for a hike in Patagonia