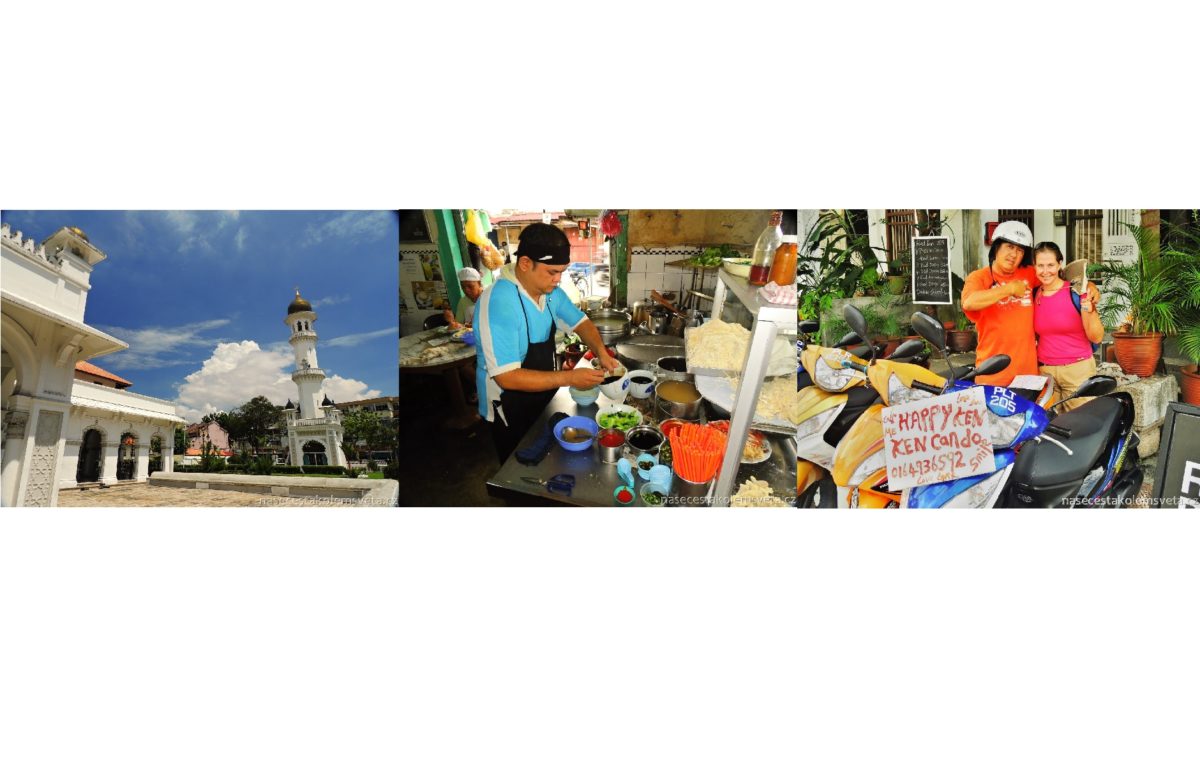 Our trip around the world took us to Malaysia where Penang island became our first stop. From Thai city of Phuket we took fairly long journey but still worth it because there is so much to admire.  We travelled again by the minivan therefore everything went smoothly. We paid 800 THB / person (approx. 565 CZK) and as everywhere in the Southeast Asia they picked us up at our hotel. We just remember that they wanted a small amount of money on our way out of the border for leaving Thailand but we spent all our money before. The locals helped us in the end because it was not much and they refused to accept US dollars instead so keep that in mind in case you plan to cross the border same way.  😉 Our base was the capital city of George Town where we stayed at the Just Inn Hostel and paid 43 MYR (approx. 242 CZK) per night for a room with fan.

We fell in love with George Town immediately because it is such an incredibly beautiful multicultural city. You can find there Malaysian, Chinese, Indian and former European colonial influences which make this place literally a fairy tale. Thanks to its past, George Town has stunning historic colonial buildings but also many mosques, Buddhist and Hindu temples can be visited there. We did not want to miss anything so we collected map of Penang with all the secret treasures of the city in the tourist center. There is a relatively large walking circuit. The most remarkable are the Clock Tower, Fort Cornwallis, City Hall, Town Hall, Love Lane, Church Street Pier, Masjid Melayu Lebuh Achech and many others. We must not forget the street art that can be seen on almost every corner with an interesting themes.

We also enjoyed local food because the cuisine in Penang is just great. We have tried many Chinese, Indian and Malaysian dishes there and believe us it was unique experience.

We managed walking around the city in 2 days but then we wanted to explore the whole island. In Love Lane we rented a scooter for 31 MYR / day (about 174 CZK) and made a circuit around the island. Towards the North we saw stunning beaches and visited so-called „floating mosque“ Masjid Terapung Pulau Pinang. We wanted to try smaller trek Canopy Walkway in the Peninsula National Park but unfortunately the section was under maintenance and the beautiful rope bridge was being reconstructed. It is also possible to do a boat trip to Monkey Beach in the park. But we continued further and visited Telok Bahang Dam with a butterly farm nearby. From the dam we drove uphill through the winding roads with beautiful views of the forests and palm groves. On the way was Lam Durian Farm and Tropical Fruit Farm. They require admission fees at all farms but even if you stop nearby you can enjoy the amazing fruit trees on the slopes. Several kilometers behind the farm was a sharp descending road through a winding road that opens spectacular views of the sea and the surrounding countryside. We traveled through small villages and observed  daily lives of local people. Sometimes we stopped and had curious children around us who wanted to practice their English with us. One of the benefits of traveling in Malaysia is that the language barrier basically does not exist as people are fluent in English.

At Penang we also wanted to visit the famous Snake Temple at Bayan Lepas whose main attraction are the snakes who occupy the temple. Reptiles here are blessed and loved. We’ve never seen anything like this. But even more we were impressed by Kek Lok Si at Air Itam which is considered to be the largest temple complex in Malaysia. It’s so huge that going all the way around in 2 hours is impossible. The temple offers various building elements – Burmese, Thai, Chinese and Indian. Nearby is the famous Penang Hill which offers spectacular views on the entire island.

In last few years Penang helped to thrive in business and large foreign companies built in there their factories. Therefore there was need to speed up land-based transport to the island. Since both bridges are quite long we decided to make a trip around and pass both. For the first time, we crossed the Sultan Abdul Halim Muadzam Shah Bridge often called the Penang Second Bridge. This bridge was built in 2014 and has a spectacular 24 kilometers. After that we travelled the mainland and returned to the island using Penang Bridge which is 13.5 kilometers long. It was quite an experience because it was windy on both bridges so it was quite a wild ride on a small scooter. If you are not a motorcycle fan you can get to George Town on the mainland to town Butterworth by ferry or take advantage of buses.

We have so many experiences from Penang that we could write a long essay about them but our photos will tell you everything you need to know. After amazing adventures we said goodbye to the island and set off in the fertile Cameron Highlands in Malaysia.

Our feelings about Thailand

Diwali - Hindu festival of lights full of love and togetherness