From busy Bangkok we went for a day trip to former capital of Siamese Kingdom. Train Bangkok – Ayutthaya was the best option of transport. We purchased a ticket for 3rd class and paid only 10 THB/person (cca 0,30 USD). Then we were enjoying for 80 km the view out of the window. Suddenly we saw Bangkok from different point of view as well as Thai countryside. Within 90 minutes we arrived to Ayutthaya. We did not fancy renting a bicycle because it 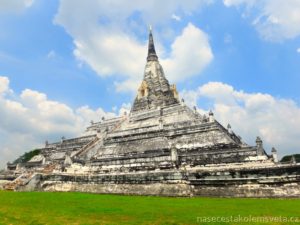 was too hot and we had so many sites to see on our list. We did not see any motorbike rentals therefore we had to find tuk-tuk driver. Well it was a hassle and we still think it was also solid rip off. But we made a final deal. For 600 THB (cca 17 USD) driver promised to take us whenever we want and for however long we want. Thailand is very demoralized in tourist matters but it did not spoil our day.

Why to visit Ayutthaya and something about its history

Ayutthaya was for 4 centuries the capital city of the Kingdom of Siam. It became an important trade center for the whole world thanks to its perfect location between China, India and Malay Archipelago. Around 1700 Ayutthaya was the largest city in the world with population around one million people. Merchants from Japan, Portugal, Netherlands and Arabic countries sailed to trade as far as to Ayutthaya which they considered the finest city in the world of their times. The city prospered at its age epoch. There were more than 400 Buddhist temples and many beautiful and rich decorated palaces. The glory of the city was cut off by Burmese who invaded there in 1767 and burnt the whole city down. Precious artefacts were stolen and moved to Myanmar. Some historical sites remained or were eventually reconstructed. Due to that we can still admire Ayutthaya today.

What to see in Ayutthaya

It is Buddhist temple the king built in order to accommodate monks. There are stupas and chedi (pagoda). You can find there also many Buddha representations, usually covered with golden robes.

There is a large wihan (hall where people gather) in this temple where you can admire immense 19 meter Buddha Thai people call him Luang Pho Tho. Outside this main hall there are also other side rooms where you can see monk during their praying times.

Wat Mahathat belongs to the most famous temple complex in the whole Ayutthaya. It has become famous for its Buddha head in the tree roots.  It is a real unique piece of nature and for sure a great reason to go for a trip to Ayutthaya. Wat Mahathat is also very rich for its Buddhist temples with many tall towers called prang we know from the Khmer architecture.

Next to Ayutthaya in a small village there is a white shrine with its 50 meter chedi (stupa-tower) dominant. It is possible to climb half of it and enjoy spectacular view to the surrounding full of temples and paddy fields.

Temple complex Wat Chaiwatthanaram is probably the best preserved one in Ayutthaya. With its Khmer style, prag (towers) and many secret entrances it reminds of Angkor Vat in Cambodia.

Our archeological adventures in Thailand came to an end for now during our trip around the world. We journed back to Bangkong from where we set out to the sea on the islands Ko Tao, Ko Phangan and Ko Samui in order to have a rest and experience again some change in the area of Southeast Asia.

Our feelings about Thailand - touristy gem in Southeast Asia

Krabi and 4 islands - adventure in Thailand