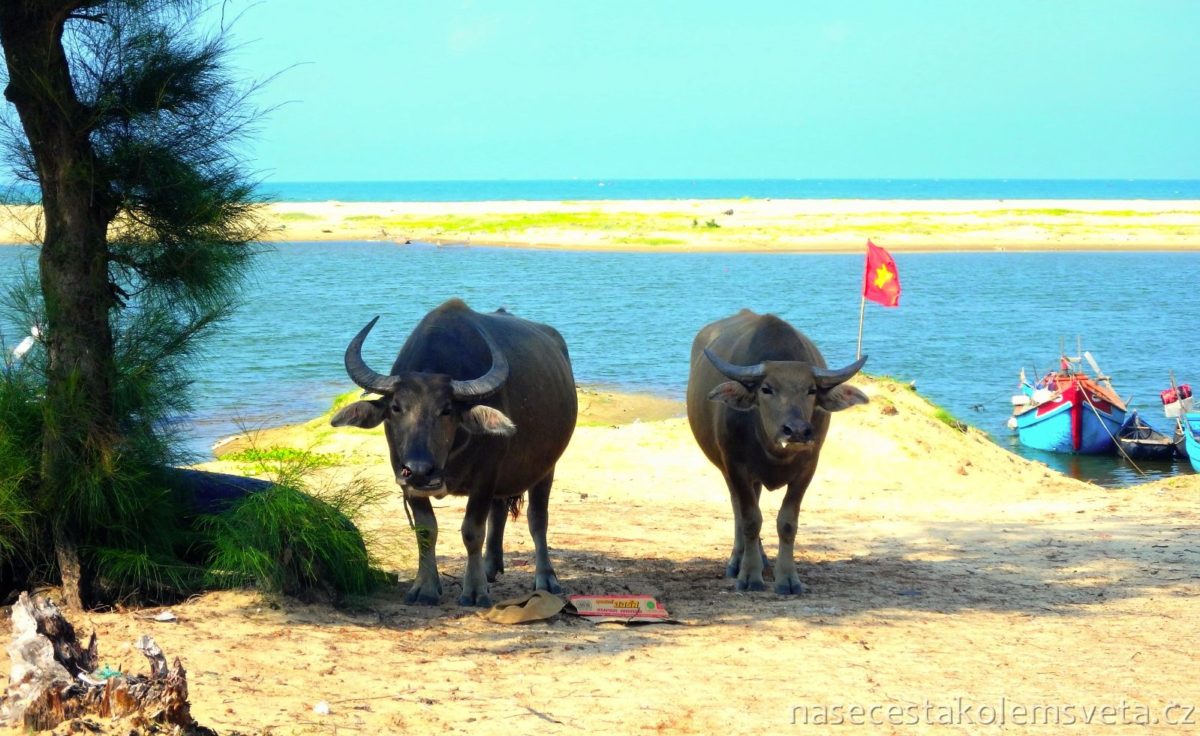 To Dong Hoi coastal town we arrived by train. Ticket from Ninh Binh in air-conditioned 2nd class cost us 314.000 VND/person (cca 13,82 USD) and the journey took 8 hours. From the train we had really spectacular views at the Vietnamese countryside. But of course we also worked there in order to utilize time. After our arrival to Dong Hoi we found accommodation on the right side of Thuan Ly street about 200 m (cca 656 feet) from the train station at a very nice young lady. She offered us a room with air-con and shared bathroom for 120.000 VND/night (cca 5,28 USD). It was also possible to rent a motorbike for  160.000 VND/day (cca 7 USD).  The next day we were able to go on another trip in Southeast Asia.

Vietnam is a country of caves and there is also the largest cave in the world Son Doong. Getting there is really expensive and difficult. Entrance fee costs 3.000 USD. The walk through the cave lasts 5 days. The number of permits is also limited annually. We unfortunately did not have 66 million Vietnamese dongs in our pocket. So we decided to go to Ke Bang National Park and visit Thien Duong – Paradise Cave for 212.500 VND/person (cca 9,35 USD). When the cave was excavated they decided to name it as Paradisce Cave because of its beautiful stalactites, stalagmites and columns. We have to admit that we have never been in such a beautiful karst cave before. We were walking there for nearly 2 hours and tried to fill up its amazing atmosphere. On the way back we stopped for food at local people, we drove though villages and simply were enjoying the magic of Vietnam’s countryside.

About 90 km from Dong Hoi there is a former Vietnamese demilitarized zone – DMZ. We visited Vinh Moc tunnels that were built for people as a bombing protection.  It was really interesting trip within our trip around the world.

We got to know a lot about people who had to live in the tunnels for years. They had school and hospital inside. Many babies were born there. Today there is a museum in memory of the victims. Everyone can find all important information about the massacres that happened here during the war. Also there is a plan of tunnels. We overcame our fear from cramped places and spiders (mainly Martina) and decided to walk through one of the tunnels. It was worth it even though it was very stressful but as a reward we won the beach where we are absolutely alone.  We did not have swim suits with us but we went swimming anyway. It was refreshing and beautiful even though it was at such a sad place with a cruel history. We were able to observe tunnel entrances from the water. It was amazing day, cheap and very informative trip which was totally worth for only 40.000 VND/person (1,76 USD) entrance fee. .

There is one beach located directly in Dong Hoi. It is nice but during the they there are too many people.  We set off

to Da Nhay Beach full of the “rocks that jump”. We wanted to swim there but the mess and trash simply discouraged us. We did not give up and went further, got lost and drove in the small lanes through villages where we met many locals. And although they did not speak English they still tried to advise us where to go next. Many of them also wanted to take a picture with us and we felt like an attraction for them. We made it to the beach with anchoring boats of hard working fishermen. There was also tiny but cute Buddhist praying place. It was a lovely day and we were really happy to get out of the main roads to meet so many nice and interesting people. Also we relaxed a bit for a while. From Dong Hoi we went to Hue Imperial City.

Da Nang and Hoi An - historical pearls in Central Vietnam