We arrived to Hue Imperial city from Dong Hoi. We travelled there by train and this time we tried 3rd class called “hard seat” where we sat on the wooden benches only. The train cost us 85.000 VND/person (cca 3,75 USD) and the most beautiful on travelling in this class were our Vietnamese fellow-passengers who really wanted to talk with us. After our arrival we accommodated in Thanh An 2 guesthouse. Owners were very nice people and we managed to bargain the price for a large room with private bathroom, hot water, internet and air-con for only 140.000 VND/night (cca 6,20 USD). It was one of the best prices in Southeast Asia. Top attraction in Hue was only 2 km (1,24 miles) distant.

Citadel with former Imperial and Forbidden city in Hue

When we reached the citadel that used to serve as a fort of the Imperial city and protected local inhabitants against unexpected guests we had to pay the entrance fee.  After all we decided to purchase multi ticket for 360.000
VND/person (cca 15,85 USD). Thanks to that multi ticket we were able to visit Hue Imperial city + visit Imperial Tombs the next day. This attraction was a bit pricey for Vietnam but we thought that when we got there it could be good to see it all. This combi ticket is also a bit cheaper than buying individual tickets at each place.

We entered the areal through south main entrance Ngọ Môn. A few steps further we appeared in Thái Hòa palace that used to serve as a coronation hall and the emperors also accepted foreign visitors there. There is still the emperor’s throne but it is not allowed to take pictures. Visitors may take it in the back part of the palace plus they can also dress in the emperor’s gown, everything is on duty of course. When we escaped the palace there was a large beautiful yard in front of us. In the past time this place belonged to the Purple Forbidden city which was unfortunately destroyed in 1968 during the Tet Offensive. It was a military operation during the Vietnam War. The operation began on Tet – Vietnamese New Year. Only 2 Mandarin Palaces still exist. Another important building in former Imperial city of Hue is Trường Sanh Residence known as the Palace of Longevity. The palace is being restored these days.  In the past this palace was used as a resident for Emperor’s mother and one of the wives. All around the citadel there are many small ponds and in the end there is a cozy café from where is a nice view at the entire site.

We rented a motorbike for 160.000 VND/day (cca 7 USD) in order to be able to set out for a trip and explore the Emperor’s Tombs in Hue. The Emperor’s Tombs are located in the south of the town close to the Perfume river. We visited 3 tombs:  Khải Định, Minh Mạng and Tự Đức.

Khai Dinh we visited as the first one and we liked it the most in general. At the beginning we had to climb the stairs

and from the top we had a brilliant view to the surrounding area. Under the tomb premise there on the smaller courtyard there were many interesting Chinese statues and elephants were not missing. Entering the tomb required walking a few more steps. It was built for Emperor Khai Dinh from Nguyen dynasty. Construction took 11 years. It is built in rectangle shape and inside you can find several interesting styles, it is most likely a mix of Asian and European culture. Compare with the other tombs this one is very small but still beautiful. Dominant feature of the tomb is the grave itself, altar and Emperor’s statue. Everything is decorated with glass and porcelain.

Minh Mang was the greatest of all tombs. It is a complex of 40 constructions. The site is amazing place of peace and

the pavilions with temples looked absolutely gorgeous. They did not even forget the water with lotus flowers and trees around. It was unfortunately not possible for us to reach the Emperor’s Tomb because he rests in peace behind the wall where lead the stairs and only the chosen ones may enter.

Tomb of Tu Duc Emperor looked also great nevertheless it did not impress us much because it was under extensive construction during our visit and most of the sites were covered by scaffolding. Simply the place was missing its spark. Even though we believe that once the renovation is finished this place will be absolutely spectacular.

Other attractions in Hue surrounding area

On the bank of the Perfume river there is Thiên Mụ Pagoda. It looks very beautiful but for us it was too touristy

therefore we rather went to Thanh Toan Bridge in the small village about 7 km (cca 4,35 miles) from Hue. On the way there we found many decorated temples and of course many nice people. We also needed to have a rest so we went off to Hot Springs Alba Resort. Do you think we were crazy to do so in such a heat? Well it was really pleasant and we were happy there was almost no one. For 170.000 VND/person (cca 7,50 USD) we had our needed rest and gained strength for our next trip. Our next stop on the trip around the world became Da Nang and Hoi An cities. 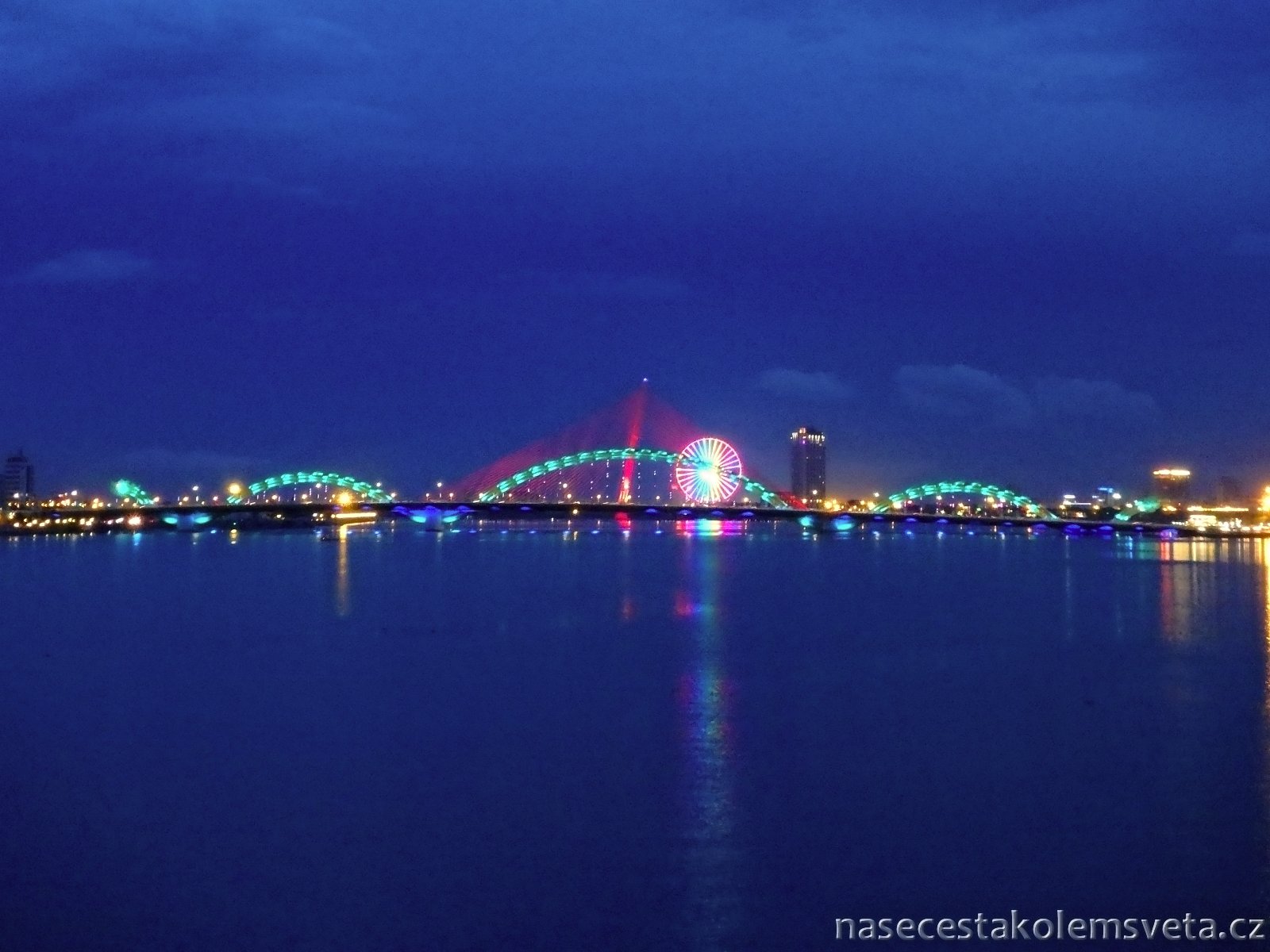 Da Nang and Hoi An

Da Nang and Hoi An - historical pearls in Central Vietnam