New York City, often called as the Big Apple or Gotham is the most populous city in the USA and is by right called „the city that never sleeps“.  While travelling the US East Coast we simply couldn’t miss NYC.

The morning walk through the lush and great Central Park was a soul boost. The park is huge and large and we walked nearly a half of it, saw many baseball and football grounds, bike trails, run trails and walking trials or places for people who just came here to relax. Out of the Central Park on Manhattan we stroled it to Morningside Heights and Harlem neighbourhoods. There is a beautiful cathedral of St. John and also the University of Columbia whose gardens and interiors can be visited without notice of security.  Thanks to our walk in the university gardens we were also able to go all the way around the cathedral and enjoy the park view in the end. From here we got on the bus and went downtown Manhattan through the famous new york avenues.

From the bus we observed lower Central  Park and places such as Plaza Hotel or Rockerfeller Center. We got off close to the National Library we had to visit. The building looks spectacular even from the ourside but the most amazing is inside on the upper floor. But eyes feasting did not come to an end on that day We decided to head towards the Empire State Building. We planned our visit wisely, arrived during the day and stayed till it was dark outside. The waiting was worth it! Observing how the lights are turning on in NYC is a super show. The entrance fee was 32 USD/person. And once it was dark outside we decided that it is best to go to Times Square, it was so close. And we loved it there, such an extraordinary experience – so many lights, ads, street artists. It lived there!

Visiting of this neighbourhood was recommended to us by our friend. The streets had names instead of numbers and we felt self-confident again. We strolled so many typical new york streets with fire escape stairs we know from the movies and TV series. But Soho and Tribeca are also great shopping spots. Unless you like giant department stores then go to Macy’s which is the largest store in the world. You can find it on  W 34th Street close to Herald Square and Fift Avenue. We do not fancy this type of shopping much therefore we went just to Soho and Tribeca. And by coincidence we found Fjällräven  store and asked them to wax our trousers for free there. And of course we became hungry, it simply belongs to shopping marathons…

Chinatown and Little Italy on Lower East Side – food paradise

Where else to go eating on the Lower Side than to Chinatown or Little Italy when you are in this area 🙂 We truly enjoyed allegedly the best pizza in the town on 27 Prince Street. It was delicious! And of course we had to go to Chinatown more than once so we can recommend you renowned Vietnamese restaurant Pho Bang New York on 157 Mott Street. And if you like desserts go on 33 Pell Street to Spicebox Crepe. They make waffle cornet instead of a classic one and add you in the fruits, ice-cream, chocolate or anything you want. It is unbelievable titbit! And if you are anywhere else in New York and hungry just stop by at any food stall. They cook so delicious meals there. And the longer waiting line, the better they make it.

The Port and the Civic Center

After a great food it was necessary to burn the calories so we decided to walk towards the Civic Center from Chinatown and then get to the Brooklyn Bridge. And it would not be a NYC gateway without walking the Brooklyn Bridge. But it was overcrowded so we spent only a short time there and after taking a pic at this attraction in New York we went away. We decided to have a better picture of the entire bridge and this can be done from the nearby port. It was so beautiful! Go there and see it for yourself. And after that it is possible to walk on the promanade towards the lookout point of the Statue of Liberty.

But the trip around the world is about exploring and we weren’t much satisfied with the overlook on the Statue of Liberty so we went to the Battery Park at Lowe Manhattan, bought a ferry ticket and went on the Liberty Island to see it closely. We had no chance to get to the crown and the tickets were sold out but we did not mind because there is a spectacular view on Manhattan from the island anyway. The lookout on the tall modern skyscrapers is impressive.

From Liberty Island we moved to  Ellis Island. For only 18 USD per person you may visit both islands. Ellis Island used to be for more than 60 years an immigration office for people travelling to the USA. For many European immigrants Ellis Island was the first place where they end up over the ocean. And the Statue of Liberty has become an important symbol. Before you go to Ellis Island, take your time to watch the movie called The Immigrant from 2013 that was filmed about immigrants coming to this island. 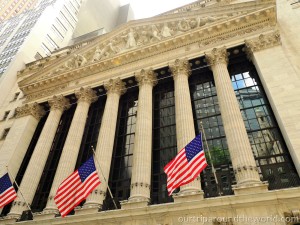 After the boat trip we went to Wall Street to take a picture of New York Stock Exchange. Wall Street is a really nice street. Close to it you may find the famous Trinity Church that is definitely worth visitng. In front of the church by roasted almonds with honey, they are delicious.

And from this part of town you can easily walk towards Ground Zero, The World Trade Center Memorial. It is difficult to write anything here as it still brings fear and bad and sad memories to many people. At the places where the skyscrapers were are now the square-shaped fountains marking the original magnitude of the Twins. On the memorial plaques there are engraved the names of all victims. Up to now there is a big question mark over the WTC attacks. There are many documents and theories claiming it could have been CIA behind that all. But there is of course no prove

New York is huge and that is the reason why one cannot only rely on his or her feet. We were so happy to use public transportation in NYC. And there are 2 option: buy a card and pay for each ride 2,75 USD and charge extra money when necessary OR purchase a 7-day unlimited ticket for 31 USD/person and ride on that.  Orienting in the subway there is easy. The only thing you need to remember is if you go downtown or uptown – away of the city center. And if you are not sure, ask people, they are nice and helpful. And maybe that was also the reason why we felt so sorry to leave NYC. But never mind, our plan is to come back in the future because we weren’t able to visit everything we wanted within our trip around the world due to weather conditions and also our illness.