From Californian city Barstow, where we said goodbye to the legendary Route 66, we set out to the nature full of beautiful plants, forests and mountains, we drove towards Sequoia National Park. But travelling in the USA is demanding as for the distance. So we decided to replenish stock in Bakersfield city and then drive towards Isabella Lake. After all we could not swim in the lake as it was almost dried-up. The period of drought supposedly afflicts California for a while. So we made a circuit around the former lake and spend overnight in one of local campgrounds and early morning headed towards Sequoia.

The road to Mineral King is beautiful especially if you avoid main and fast roads. We drove through the park any way possible and met only 3 cars along the journey during the whole day. Why to go to Mineral King? It is far from the civilization and there is amazing peace. We went up towards Cold Spring Campground where we paid 12 USD/tent/night.  In the morning does were walking around our tent. We desired to see the bears but they never came. Even though they might be around as there were bear boxes in the campsite where we had to keep all our food and cosmetics. Campsite was very simple with dry toilette but we did not mind because there was a river with crystal clear water so we were able to have a bath in there.

Hiking and walking in Mineral King

Mineral King offers many trailheads to its visitors. If you are not sure which trail to hike talk about it with rangers, they will advice you. We went for one day hike to White Chief Canyon in Mineral King. In the campground we

met David, 75-year old American, who gave us a runs because was in a better shape than us. And on the top of that he knew Sequoia and Mineral King like these places were his home. 😉 On the trail we wer mesmerized by spectacular views and landscape transformation. At the beginning we hiked up the giant hill ful of trees, then we walked on the rocks with old and strangly shaped trees and in the end we were welcomed by the huge meadow full of green grass and unknown flowers. Then we reached the river stream and climbed up to the first mine.  In the past people believed that Sequoia National Park and especially Mineral King area was rich in gold. After many years of digging they did not find anything. But mines are open up to now and it is possible to visit them. How it usually goes in the mountains the weather changes randomly so we decided to hike back to the campground. During our snack break we sighted marmots for the first time. From the beginning they were pretty scared but after a few minutes they became braver and started running around us. When we arrived back to the campsite it started getting cold outside so we made a fire and till dusk we were telling stories from the trip around the world to our nice companion David. In return he gave us many useful tips where to go within our road trip in the US Southwest. 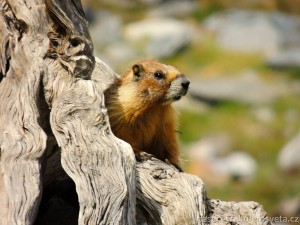 Even though marmots may look like cute animals they can allegedly make big damages. We noticed for the first time in Sequoia National Park that people wrapped their cars in tarps in order to prevent damage from marmots. At the beginning we did not understand why later on rangers and people explained us that marmots tend to bite car wires. Rangers also say it is not always necessary to wrap the cars. They say marmots are attracted by the engine heat so to avoid this you can also only lift the bonnet up so there is more light that they do not like and engine gets cold quite fast. It is also not necessary to do all the time, just ask rangers if they spot marmots around campgrounds when you arrive. 😀

Sequoia and Kings Canyon – where the largest trees are

These are two different parks but with same entrance fee of 20 USD/car/7 days and you can explore both of them. We stayed only in Sequoia as our time was limited. On the way from Mineral King we stopped at a granite dome rock 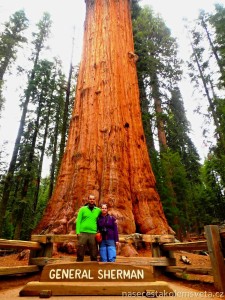 formation called Moro Rock. Of couse we decided to walk up there to enjoy a fantastic view on Sequoia National Park. From here we followed driving the Crescent Meadow Road to get to the famous Tunnel Log. It is a fallen sequoia tree that was shaped to a tunnel everyone can drive through. On the way there we met many interesting sequoia trees of many shapes and they were giant.

And here we are in the Giant Forest where the largest living single stem tree is, famous General Sherman tree. Apart from this tree there are 4 other trees in the park that are as for the volume considered one of the largest trees in the world. Giant Sequoias are rightfully called mammoth trees. When we walked the Giant Forest we felt like real dwarfs.  Being surrounded by tall sequoias is breathtaking. And the trees are not giant only themselves, in Sequoia we found really big cones. The one we found was larger than our head. It was the biggest cone we have ever seen in our lives. And even though it is not allowed we had to take it with us to Yosemite National Park that was our next stop. 🙂